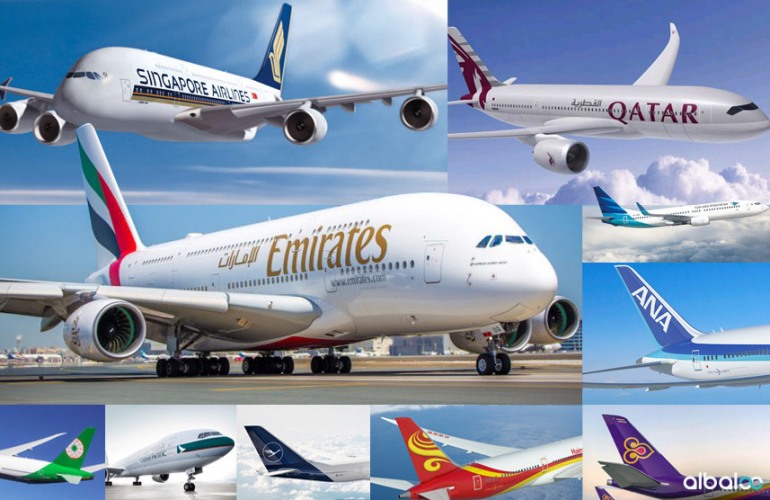 When we plan our travel adventures, we tend to look for the best airline which will ensure that we reach our destination safely but also that we can travel in comfort at an affordable cost. Read on to find out more about 10 of the most popular airlines around:

1.Singapore Airlines is the flag carrier airline of Singapore with its hub at Singapore Changi Airport. The airline uses the Singapore Girl as its central figure in corporate branding. The luxury airline has won many accolades including “Best First Class”, “Best First Class Airline Seat”, and “Best Airline in Asia”. This is an addition to over two decades of being ranked the world’s best airline by Travel & Leisure magazine. In 2018, the airline was placed 18th on the top 50 most admired companies worldwide, first in Asia and the only airline on the list. Singapore Airlines flies to 62 destinations in 32 countries on five continents from its primary hub in Singapore.

2. Qatar Airways is the state-owned flag carrier of Qatar. The airline is based in the Qatar Airways Tower in Doha. It currently operates a diverse network linking over 150 international destinations across Africa, Central Asia, Europe, Far East, South Asia, Middle East, North America, South America and Oceania from its base at Hamad International Airport, using a fleet of more than 200 aircraft.

3. All Nippon Airways is the largest airline in Japan in terms of revenues and passenger numbers. Its headquarters is located in Shiodome City Center in Minato, Tokyo.It operates services to both domestic and international destinations including North and South America, the Caribbean islands, Europe, Middle East and many Asian countries.

4. Emirates is an airline based in Dubai, United Arab Emirates.The airline currently operates over 3,600 flights per week from its hub at Dubai International Airport, to more than 150 cities in 80 countries across six continents. Emirates is the world’s fourth largest airline in terms of passenger-kilometers flown and the number of international passengers carried. The airline has flights to locations in North and South America, Europe, Africa, Asia, Australia and the Middle East. For incredible deals on Emirates flights, you can simply click on https://www.albaloo.com/onlinedeals and get amazing prices on flights to your favourite destination.

5. Eva Air also known as Evergreen Airways, is a Taiwanese international airline based at Taoyuan International Airport near Taipei, Taiwan that operates passenger and dedicated cargo services to over 40 international destinations in Asia, Australia, Europe, and North America.

6. Cathay Pacific Airways is the flag carrier of Hong Kong, with its head office and main hub located at Hong Kong International Airport. The airline’s operations and subsidiaries have scheduled passenger and cargo services to more than 190 destinations in more than 60 countries worldwide.

7. Lufthansa: Deutsche Lufthansa AG, commonly known as Lufthansa, is the largest German airline which has many subsidiaries to its name. When combined with its many subsidiaries which includes Swiss International Airlines, Austrian Airlines etc, the airline is the largest airline in Europe in terms of the number of passengers carried.  Lufthansa currently has flights to dream destinations in Europe, Asia, quaint cities in Germany and North and South America.

8. Hainan Airlines: an airline headquartered in Haikou, Hainan, People’s Republic of China. It is the largest civilian-run air transport company, the fourth-largest airline in terms of fleet size in the People’s Republic of China, and tenth-largest airline in Asia in terms of passengers carried. It operates scheduled domestic and international services on 500 routes from Hainan and nine locations on the mainland, as well as charter services.

9. Garuda Indonesia: s the national airline of Indonesia. It is the second largest airline of Indonesia after Lion Air and it operates scheduled flights to a number of destinations in Southeast Asia, East Asia, South Asia, the Middle East, Australia and Europe from its main hub in Jakarta, Soekarno–Hatta International Airport, as well as services to Australia and Asia from Ngurah Rai International Airport (Bali) and a large number of domestic flights.

10. Thai Airways is the flag carrier airline of Thailand. The airline’s main hub is located at Suvarnabhumi Airport and secondary hub at Phuket International Airport, Thai (including subsidiaries) flies to 84 destinations in 37 countries, using a fleet of over 90 aircraft. Thai’s route network is dominated by flights to Europe, East Asia, and South/Southwest Asia, though the airline serves five cities in Oceania.

There are plenty of airlines to choose from – visit albaloo.com for the best travel deals that you won’t find anywhere else!

Albaloo’s amazing features and marketing activities help Sellers connect with Shoppers for the Best Deals! It is an advertising platform for you to find the best deals and events happening in town.